Visit of a delegation from the University of Paris 2 Panthéon-Assas, led by President Stéphane Braconnier, to the Mauritius campus.

After more than 20 months without the possibility to travel to the Mauritius campus due to the pandemic, a delegation from the University Paris 2 Pantheon-Assas was finally able to visit Mauritius.

President of the University, Stephane Braconnier, accompanied by Emmanuelle Chevreau, Vice-President in charge of International Relations, Anthony Mergey, Dean of the Mauritius Campus, and Malik Laazouzi, Dean of the LL.M, have been welcomed this week by Ekaley Joulia, Executive Director of the freshly renovated Mauritius Campus.

This trip was an opportunity to meet the Mauritian professors and students, pay a courtesy visit to key institutions as the Higher Education Commission (the Regulatory Body for tertiary education in Mauritius), the Quality Assurance Authority (which promotes, maintains and enhances quality assurance of higher education in line with international high quality standards), and The French Embassy in Mauritius.

The delegation of the University was also invited for a lunch organised by our local partner, the Medine Group, represented among others by its CEO, Dhiren Ponnusamy, the General Manager of Uniciti Education Hub, Steena Kistnen and the Operations Manager, Karveen Puddoo, whom we would like to thank for its their continuous involvement in the development of our presence in Mauritius and Africa.

After more than a year with limited travel between Paris and Dubai, Nora Carisse, Administration and Finance lead at the Sorbonne Assas – International Law School has finally been able to visit our campus at the DIFC Academy in Dubai.

She was warmly welcomed by some of the Bachelor of Laws, LLB 1st and 2nd year students. 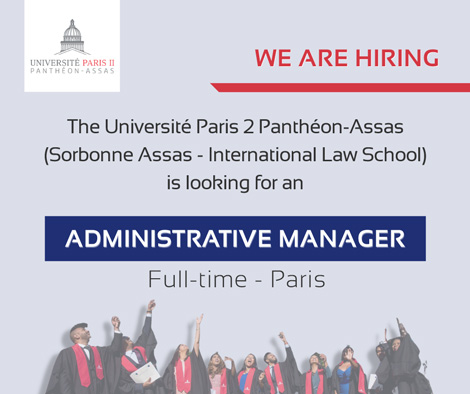 Details of the offer:
https://www.u-paris2.fr/fr/universite/recrutements/administration/gestionnaire-administratif-hf 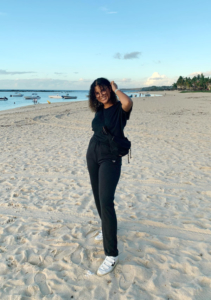 Soon after receiving my acceptance letter from Paris II Panthéon Assas in January, I started researching apartments in Mauritius. I was so excited and I wanted to leave right away!

I found the perfect apartment a short time later and booked it immediately, little did I know a pandemic would break out, delaying my decision to leave my country. Nobody knew when the Mauritian borders would reopen, thus, in the hopes I could still leave in July, I kept my apartment and never lost hope, but the uncertainty was frightening – the border reopening was postponed every month and COVID-19 never seemed to end. Seeing no end to this pandemic really put a strain on everything and it was difficult to keep a positive attitude.

Just when everything seemed bleak, the borders reopened! This gave way to another problem: the student visa, which was strenuous to receive. Thus, my classes started online. However, because of the time difference of 3 hours, the lectures were super early for me. I did not complain as for other foreign students, the time difference was of 10 hours. It was very tiring and even though online learning has its positive outcomes, it was still a very stressful time.

As I grew tired of waiting, I decided to come to Mauritius on a tourist visa. This was quite risky because you cannot change from a tourist visa into a student one, but the end justified the means.

Besides, I had been paying for my apartment for months now, holding onto a small glimpse of hope for as long as I could. Additionally, around October, the weather was getting worse in Europe and better in Mauritius. I thought, in the worst scenario I still would’ve spent between 3 and 6 months on a beautiful island attending my online classes, and living a normal Covid-free life instead of spending winter in France.

The trip and the quarantine went by smoothly, everyone was so nice and welcoming. It was my first time traveling so far from home alone for such a long time, and I am so glad many people immediately took me under their wing and helped me out.

It took some time to adapt to the island life, for example, the transportation in Mauritius is different to what I am used to in France. And one common element I find amusing is the tardiness of the Mauritian people! I don’t know if I’ll get used to that. To be honest, sometimes it got so difficult to adapt that I even thought of flying back home. But, meeting the right people, making some friends and allowing myself to discover this beautiful island really helped open my eyes. I started to love the food, the people, the culture and hanging out at the beach. I even got to like these crazy bus rides – something I thought possible only in my wildest dreams! Alas, every good thing must come to an end; we started to see a rise in COVID-19 cases again. Everything shut down so fast – the gym, the beach, and the restaurants. I found myself alone in my apartment and it lasted 3 days until I wanted to go back home. It was good timing either way, as my tourist visa soon would’ve expired.

I took the first flight that left the island, with a heavy heart and with much regret, but it lifted my spirits knowing that next time, I would be more prepared.

I miss Mauritius everyday, and hopefully soon, I’ll be eating “boulettes” on the beach again.

Get in touch with Jeannette?

Strongly committed to expanding its global footprint, and consolidate its presence in Mauritius, Université Paris 2 Panthéon-Assas has, this year, invested in brand new premises within the unique and beautiful setting of the Pierrefonds Campus.

The unveiling of the new setting was graced by H.E. Florence Caussé-Tissier, Ambassador of France to Mauritius and her colleague Patrick Parrot, Educational Cooperation Officer from the Ambassade de France à Maurice, in the presence of Ekaley Joulia, Executive Director of the Mauritius Campus, members of higher management of our partner, the Medine Group, namely Dhiren Ponnusamy, CEO of Medine Group, Steena Kistnen, General Manager of Uniciti Education Hub and Javesh Boodnah, Chief Financial Officer and Head of Technology of Medine Group, along with students.

Despite his absence on this special occasion, in the context of the global pandemic, Professor Anthony Mergey, Dean of the Mauritius campus, wanted to share the spirit and purpose of this new facility of Université Paris II Panthéon-Assas, “While the sanitary crisis which has impacted all our lives has pushed us to reinvent our ways, adopting innovative solutions to cater for new methods of delivering quality education, above all, we wanted to enhance the experience of our law students through added lifestyle and dedicated amenities. Our students today have a newly-designed administrative space to go to, a cosy and spacious student lounge and library, as well as technology-equipped classrooms for added experience whether in-person or online (if required by exceptional circumstances). We are more than happy to welcome our new student cohort as well as our existing students.” 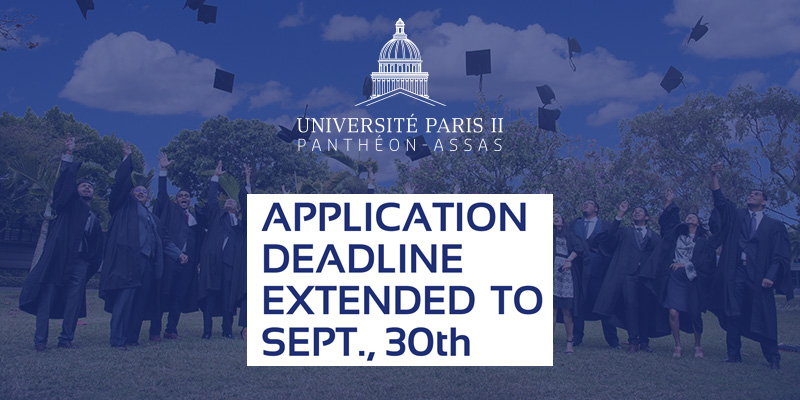 We are still receiving applications for the LL.M. International Business Law.

The University is pleased to extend the application deadline for the 2021 intake. Submit yours by the 30th Sept. 2021. 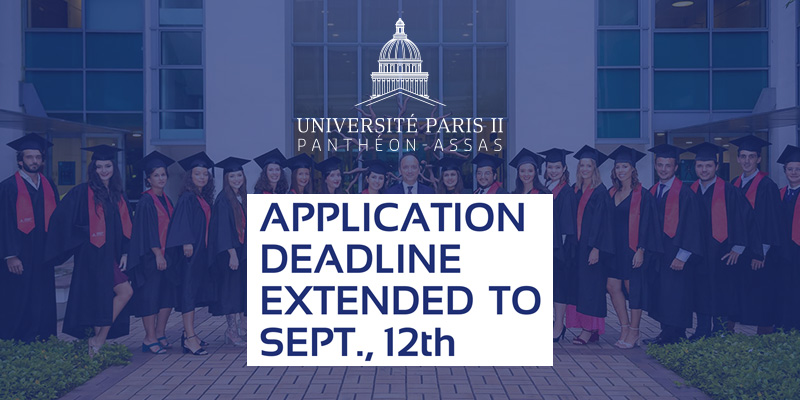 We are still receiving applications for the LL.M. International Business Law.

The University is pleased to extend the application deadline for the 2021 intake. Submit yours by the 12th Sept. 2021. 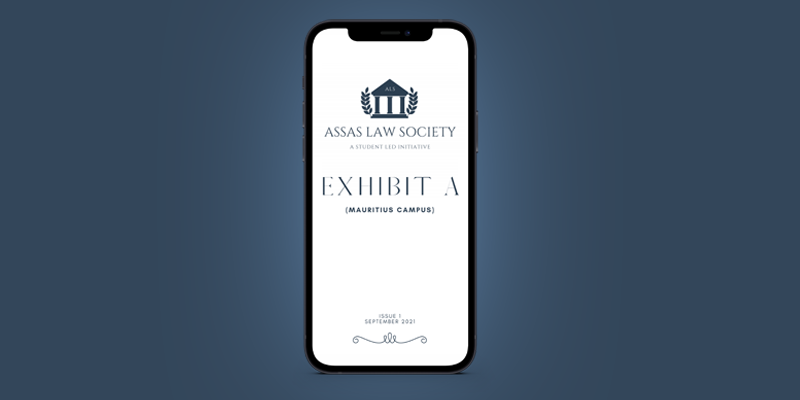 The Mauritius Campus Assas Law Society is launching today its first (but not the last!) newsletter.

This initiative has been welcomed by Anthony Mergey, President of the Mauritius Campus:
« While the health context has, for more than a year now, not been very conducive to good news, we have to welcome this great initiative from the Assas Law Society. Led by a group of LL.B.students from our Mauritius campus, its newsletter project has become reality. As Dean of the LL.B. programme and President of the Mauritius campus, I am delighted to see our students’ enthusiasm to develop and implement this project. »

We are still receiving applications for the Bachelor of Laws, LL.B. (Hons).

In light of the HSC results announced on 17 September in Mauritius, the University is pleased to extend the application deadline for the 2021 intake to 20 Sept. 2021.

PepsiCo, through its philanthropic arm, the PepsiCo Foundation is partnering with the University Leadership Council (ULC) (…), and intends to invest $150,000 (AED550,000) in 2021 and awarded in two installments.

The first installments of the scholarship seek to benefit female students for a three-year undergraduate Bachelor of Laws degree with the University of Paris II (France’s leading Law School).

Guillaume Leyte, President of the University Paris II International Law School thanked PepsiCo for its contribution, saying, “I have had the privilege to work with Rania closely and witness firsthand her incredible leadership, keen interest to empower young women, and her firm belief in the study of law as a unique path to exercise responsible leadership. It is my firm conviction that this scholarship will contribute to the dream and vision that Rania wished for every future young woman leader.”